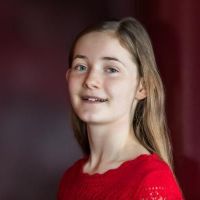 Alma Deutscher was born in 2005 She started playing the piano when she was two years old and the violin when she was three. Soon afterwards she started improvising simple melodies on the piano. At six, she completed her first piano sonata, and at 7 a short opera, “The Sweeper of Dreams”.

Conductor Zubin Mehta described Alma Deutscher as “one of the greatest musical talents today.” Sir Simon Rattle told the BBC: “Alma is a force of nature. I don’t know that I’ve come across anyone of that age with quite such an astonishing range of gifts.” Composer Jörg Widmann said he had never met a talent like hers before.

She wrote a violin concerto and a piano concerto between the ages of 9-12. The full version of both concerti was premiered with the Wiener KammerOrchester in the Carintischer Sommer Festival in 2017, and she has played them with major orchestras in Europe, America, and in China.

Between the ages of 8-12, Alma Deutscher composed her first full-length opera, “Cinderella”. The orchestral version was premiered in Vienna in 2016 to critical acclaim. “Der Standard“ reported about “this astonishing girl who wrote also this astonishing opera which bubbles with composer's ideas”. A fuller version of the opera was performed in California in 2017, and described by “Opera Today” as a “once-in-a-lifetime opera-going event that had audiences standing and cheering.” This production has been released on DVD with Sony Classical. A children’s version of the opera was staged by the Vienna State Opera in 2018 and revived in 2019, with all performances selling out. The Wiener Zeitung wrote: “In concentrated form, Deutscher hosts a firework of her catchiest ear-worms, and the twelve-year-old is a highly gifted melodist. Her cantilenas… convey bottomless grief or overflowing yearning.”

In October 2019, she received the European Culture Prize in a ceremony at the Vienna State Opera. In September 2019 Deutscher was also chosen by “Stern” Magazine as one of twelve ‘Heroes of Tomorrow’.

Her first piano solo album, “From My Book of Melodies”, was released by Sony Classical in November 2019. Saarländischer Radio described it as “The poetry of Franz Schubert, the melancholy of Chopin, the grace, lightness and brilliance of Mozart - all this can be found in Deutscher's piano treasures. In addition, a good portion of childish exuberance shines through again and again.… In her album, we find outstanding and brilliantly interpreted compositions.”

Alma Deutscher has given recitals and concerts around the world, including in the Lucerne Festival, Aix-en-Provence Festival, and Beijing Music Festival, and in the Wiener Musikverein and Konzerthaus.

She has featured prominently in the international press, from the New York Times to the China Daily, and in most major newspapers of Austria, Germany, and the rest of Europe, from Die Zeit and SZ to the Financial Times and Le Figaro. She has also appeared in numerous television programs across the world. In 2017 she was the subject of an hour-long BBC Documentary and a CBS “60 Minutes” documentary. Her YouTube Channel has nearly 10 million views.