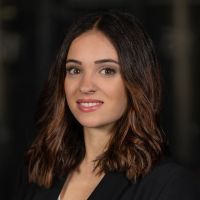 Annachiara Corti was born in Pescara (Italy).  At 13 years old she moved to the Accademia Nazionale di danza in Rome where she graduated in June 2016 under the supervision of Gabriella Tessitore. From November 2016 to March 2017 she joined, as guest, the Ballet Dortmund for the production of „Swan Lake“.

From July 2017 to April 2018, she joined Tulsa Ballet II (USA) under Artistic Director Marcello Angelini, where she worked with Ma Cong, Jennifer Archibald and Derek Dean. She performed at the Tulsa Performing Art Center, „Don Quixote“, „The Nutcracker“, „Strictly Gershwin“ (North American premiere) and „Cinderella“. From 2018 until 2021 she joined at the National Ballet of Ireland where she performed „Swan Lake“, „The Nutcraker“ and a neoclassical version called „The Nutcracker sweeties“ in a nationwide tour. In the season 2022/2023 she became a member of the Salzburger Landestheater Ballet.