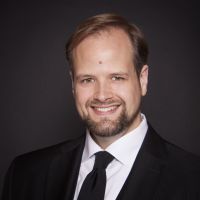 Benjamin Bruns started his singing career as an alto soloist with the boys’ choir in his hometown of Hanover. After four years of private singing lessons with Prof. Peter Sefcik, he studied at the Academy of Music and Theatre in Hamburg under Kammersängerin Renate Behle. While still a student he was offered a permanent contract by the Theater Bremen, a position which allowed him to build up a broadlybased repertoire at an early stage. This was followed by a similar contract with the opera in Cologne. His professional journey then took him via the Dresden State Opera to the Vienna State Opera, where he continues to hold a seasonal contract.

In the 2018/2019 season, Benjamin Bruns sings for the first time at the Teatro Muncipal de Santiago (Chile) debuting in the role of Alwa (Berg: “Lulu”), at the Vienna State Opera in the roles Apparition of a Youth (Strauss: “Die Frau ohne Schatten”) and Camille (von Einem: “Dantons Tod”), as well as Hylas in a new production of Berlioz's “Les Troyens”. Further he performs in the roles of Don Ottavio (“Don Giovanni”) and Italian Tenor (“Der Rosenkavalier”) at the Vienna State Opera, as well as Tamino (“Die Zauberflöte”) at the Bavarian State Opera in Munich and as Wenzel at the Semperoper Dresden (“Die verkaufte Braut”).

Oratorio and song recitals are an important complement to Benjamin Bruns’ work in opera. At the heart of his extensive concert repertoire are the great sacred works by Bach, Handel, Haydn, Mozart, Schubert and Mendelssohn. He has sung with such renowned ensembles as the Berlin Philharmonic, the Saxonian State Orchestra Dresden, the Deutsche Kammerphilharmonie Bremen, the Munich Philharmonic, the Gewandhaus Orchestra Leipzig, the Boston Symphony Orchestra, the Czech Philharmonic, the MDR Symphony orchestra, the Bamberg Symphony, the Leipzig Thomanerchor and the RIAS Chamberchoir as well as the Choir and Orchestra of the Accademia di Santa Cecilia in Rome. Interesting projects in the current season include four concert performances of Mozart's “Don Giovanni” with the Kammerorchester Basel under Giovanni Antonini in Hamburg, La Chaux-de-Fonds, Paris and Basel as well as Beethoven's Ninth Symphony with the Accademia Nazionale di Santa Cecilia in Rome, conducted by Kirill Petrenko. Other interesting projects include a cantata concert with works by J.S. Bach with the International Bach Academy Stuttgart under the baton of Hans-Christoph Rademann, Bach's Christmas Oratorio with the Zurich Singing Academy, Beethoven’s “Missa solemnis” with the Bavarian State Orchestra under Kirill Petrenko, Rossini's “Petite messe solenelle” with the NDR Choir under the lead of Klaas Stok and Bach's St. John Passion with the Gürzenich Orchestra Cologne under François-Xavier Roth.

Benjamin Bruns is an award recipient of the Bundeswettbewerb Gesang (Federal Singing Competition) in Berlin, the Hamburg Mozart Competition and the international singing competition of the Schloss Rheinsberg Chamber Opera. Other special honours bestowed to him include the 2008 Kurt Hübner Prize awarded by Theater Bremen and the 2009 Young Musicians’ Prize awarded by Schleswig-Holstein Music Festival.