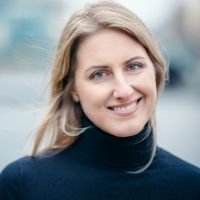 wrote Michael S. Zerban, in: Opernnetz, May 5, 2013 after her huge success as ‚Suor Angelica’/”Suor Angelica” in a new production at the Opera Cologne (Will Humburg;Eva Maria Höckmayr).

And in fact - due to the beauty and illuminating power of her voice the young American soprano has rapidly gained international recognition and established herself as a first-class signer of German, French and Italian repertoire, what she presents on all main stages. The season 2017/18 started with her convincing portray as ‘Alice’/”Falstaff” (Christoph Waltz;T. Netopil) at the Vlaamse Opera, followed by her excellent role-debut as ‘Leonore’/”Fidelio” (Jan Schmidt-Garre; Otto Tausk) at Theater St. Gallen. Various concerts, like “Four last songs” at both Liceu Barcelona and Orchesta sinfónica de Tenerife as well as her role-debut as ‘Marschallin’/”Der Rosenkavalier” will close the season.

A milestone of her career was her sensational success as “Arabella” both with public and press in a new production at De Nederlandse Opera Amsterdam (Christof Loy/Marc Albrecht, a role she also interpreted before at Minnesota Opera as well as at the Deutsche Oper am Rhein in Düsseldorf (Axel Kober). Subsequently and in a minimum of time, there followed major role-and house-debuts, like ‘Pamina’/”The Magig Flute” (Constantin Trinks) and ‘Fiordiligi’/”Cosi fan tutte” (Philippe Jordan; Anne Teresa de Keersmaeker) at the Opéra de Paris Bastille, ‘Eva’/”Die Meistersinger von Nürnberg” (Daniele Gatti) and ‘Leonore’/Fidelio (Myung Whun-Chung) both at La Scala di Milano, Giovanna d’Arco (Will Humburg) in Bonn, Vitellia/”La clemenza di Tito” at the Opéra National du Rhin (Andreas Spering), a concert version of “Feuersnot”/Diemut in New York Carnegie Hall,  ‘Contessa’/”Le nozze di Figaro” at the Staatsoper in Hamburg, ‘Mimi’/”La Bohème” at the Opera Cologne, ‘Donna Anna’ at the Munich State Opera, ‘Desdemona’/”Otello (Axel Kober; Michael Thalheimer) at the Deutsche Oper am Rhein at the Deutsche Oper am Rhein in Düsseldorf. She also returned to the Deutsche Oper Berlin as ‘Donna Anna’/ “Don Giovanni” and ‘Violetta’/ “La Traviata”.

Future projects include her debuts at the Salzburger Festspiele as ‘Eva’/” The Mastersingers of Nuremberg” (Christian Thielemann) at the Theater an der Wien as “Euryanthe”/titelrole (Christoph Loy) and as ‘Agathe’/”Freischütz” at Zurich Opera, her returns to the Semperoper Dresden as ‘Leoore’/”Fidelio”,  to Opéra de Paris Bastille for new productions (“Don Giovanni”) as well as revivals (“Cosi fan tutte”),  to the Deutsche Oper Berlin as ‘Rosalinde’/”Die Fledermaus”, as ‘Tatjana’/”Eugen Onegin” to the Liceu Barcelona and as “Alcina”/titelrole to the Deutsche Oper am Rhein Düsseldorf. Jacquelyn Wagner has got a significant concert-repertoire, which will lead her to upcoming concerts with the Munich Philharmonic Orchestra (V. Gergiev) in Munich and Paris, to the Konzerthaus in Vienna (Philippe Jordan) and to various gala-concerts like to the Dzintari Festival Riga (Ainars Rubikis).

The artist started as a member at the Deutsche Oper Berlin, where she has sung all important parts of her repertoire including Pamina/“Die Zauberflöte“, ‘Contessa’, Micaela/“Carmen“‚ Musetta/“La Bohème“. Guest engagements led her to the Oper Frankfurt as ‘Contessa’ with “Freischütz“/Agathe to Toulon, as ‘Donna Anna’  to the Miami Opera, as ‘Micaela’ to the Semperoper Dresden, as Fiordiligi to the Grand Théâtre de Génève, the Staatstheater Stuttgart, the Vlaamse Opera Antwerp and the Opéra de Marseille, with recitals and as ‘Contessa’ to Tokyo and Nagoja, as ‘Gutrune’/”Götterdämmerung”  to the Gran Teatre del Liceu Barcelona. Various concerts brought her to Spain and to the Liverpool Philharmonic Orchestra (Roland Böer, “Creation”), regularly to the RSB Berlin with Beethoven 9, ‘Les illuminations’ and ‘Shéhérazade’ and Florent-Schmitt Psalm 47 (Marek Janowski), “Four last songs” (Vladimir Jurowski), Gürzenich Orchestra (Alejo Perez) and most recently with Mahler 8 (Kent Nagano) to the Elbphilharmonie Hamburg.