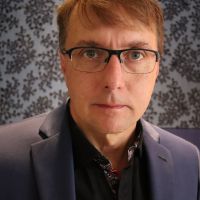 John is currently the Director of Production for New York City Opera. Since starting this position in 2015, he has been responsible for all the aspects of the physical production of the company as well as the resident Scenic Designer. During that time, he has designed dozens of productions for the company.

In New York was the resident designer for Dicapo Opera where he has created over ninety productions from 1992-2013. At Radio City Music Hall, he was the scenic supervisor for the Spring Spectacular Easter Show for two years and the Christmas Show for one. Radio City productions outside New York were the Christmas shows in Chicago, Detroit, and Los Angeles as an associate designer.

Mr. Farrell was the exclusive Set and Illusion designer for the Magician Criss Angel from 1993-2015. During that time, he has done three television specials; MindFreak for ABC Family, SuperNatural for The Sci-Fi Channel, and Mr. Marick vs. Criss Angel for Tokyo Broadcasting. Following those, six seasons of Mindfreak for A&E totaling nearly 100 episodes. The production Criss Angel Believe produced by Cirque du Soleil at the Luxor Hotel and Casino in which John was the Director of Illusions ran from 2005 for seven and a half years then became Mindfreak Live for three years before moving to Planet Hollywood. For Criss, John was also the Production Manager for four years which included two live touring productions in addition to a TV series and the Vegas show all running concurrently.

Other television credits include Supervising Art director for America' Got Talent seasons 7 -10, Gossip Girl the final season, For What it's Worth for VH1 Classics, Toys “R: Us (commercial), The Dream Team-1996 Olympic Special for NBC, 1994& 1995 Tony Awards, HBO’s Earthly Possessions and for MTV; Get Late with Kennedy and Squirt TV.

Internationally John designed the scenery for the production, Turandot in Hong Kong; Emeline and The Crucible for the Szeged National Theatre with Mezzo Television. For Mexico City, he has designed three productions for Morris Gilbert: Fiddler on the Roof, Sweet Charity, and Besame Mucho. He has worked regionally in the US for such theatres as The Walnut Street Theatre(16 years) & Pittsburgh Civic Light Opera, PA; Theatre Under the Stars, The Fifth Avenue Theatre, WA; Tampa Bay performing Arts Center, Sarasota Opera, FLA; Chatauqua Opera, NY; and Maine State Music Theatre, ME.