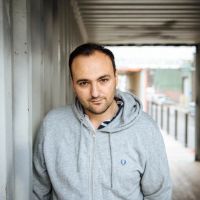 Nuran David Çalış was born in Bielefeld in 1976. He works as a theatre and film director and writes screenplays and plays. The son of Armenian-Jewish immigrants from Turkey studied directing at the Otto-Falckenberg-School in Munich. His production of Schiller’s The Robbers in 2006 gained him the Nestroy Award as Best Emerging Director. Çalış established his exceptional reputation as a director with numerous adaptions of classics, such as Wedekind’s Spring Awakening, which premiered 2007 at the Schauspiel Hannover and was made into a film in 2010 for ZDF. The film version of his “Woyzeck” starring Tom Schilling was invited to the 34th Filmfestival Max-Ophüls-Preis 2013. The director and writer Çalış is furthermore an expert for documentary theatre with a political focus. From 2014 to 2017 he developed his “Keupstraßen”-trilogy at the Schauspiel Köln. This trilogy included „Die Lücke“, „Glaubenskämpfe“ and „Istanbul“ and was a much-noticed semi-documentary project about the bombing by the National Socialist Underground. It was developed together with local residents and victims. His theatrical work brought him to Cologne, Essen, Hamburg, Berlin, Stuttgart, Mannheim, Bochum, Dresden and Vienna. 2020/2021 he will realize the project #ERSTHELFER #FIRSTAID at the Salzburg State Theatre that deals with the refugee situation in summer 2015.