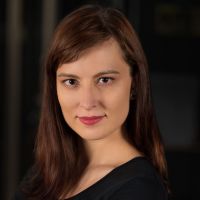 The Hungarian Mezzosoprano Zsófia Mózer has been a member of the International Opera Studio Gerard Mortier at the Salzburger Landestheater in the 2019/2020 season. At the same time she is finishing her Master’s degree in Opera and Music Theater at the Mozarteum University in Salzburg as a student of Elisabeth Wilke, Karoline Gruber and Kai Röhrig. Most recently she performed the role of Lisetta in Haydn’s “Il Mondo della Luna”. Earlier this year she sang Dorabella as well as Bastien in a semi-staged version of “Cosí fan tutte” and “Bastien und Bastienne” respectively. In the past year she embodied Hermia in Britten’s “A Midsummer Night’s Dream” and she performed a staged version of Arnold Schönberg’s “Pierrot Lunaire”. She sang as Opera Gala soloist with the Bad Reichenhaller Philharmonie in Germany, and she gave concerts in Hungary, Germany and Bulgaria. Zsófia sang as the Alto soloist in different oratorios, among them Pergolesi’s Stabat Mater, Fux’s Missa in C, Orbán’s Stabat Mater in d, and Bach Cantatas. In the 2020/2021 season she will once again appear in the role of Dorottya Pesty in the revival of "Viva la Diva" in Ingolstadt.